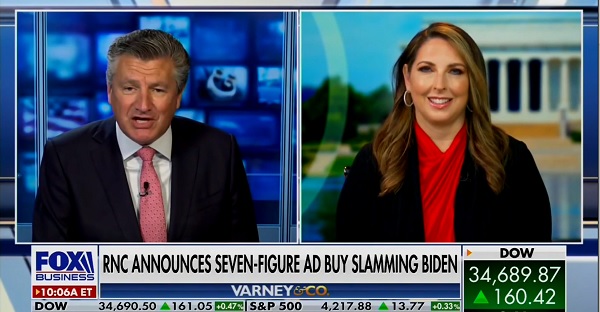 "Joe Biden has offered nothing but divisive partisanship and failed policies," said RNC Chairwoman Ronna McDaniel. "With Americans more divided than ever thanks to his failed leadership, the Republican Party is proud to offer a better vision for America, which is why we are bringing our conservative message of unity and prosperity to the national airwaves. Our winning Republican agenda will triumph over Democrats' politics of division and lead our nation towards a better, brighter future."

"I have never been more confident in the American family," said Senator Tim Scott (R-S.C.). "Republicans have proven to the nation that conservative solutions and commonsense policies could lift millions out of poverty, create a more inclusive economy, and chart a direct path to the American Dream. Our future is in the hands of everyday Americans working hard to support their families and give back to their communities. With Republicans at the helm, we'll make sure they have every opportunity to succeed."

The RNC is making this significant off-year investment because the Committee believes that it's crucially important to highlight the sharp contrast between Democrat division and failure and Republican optimism and prosperity.

SCOTT: A president who promised to bring us together should not be pushing agendas that tear us apart.

Our best future will not come from Washington schemes or socialist dreams. It will come from you, the American people.

We are not adversaries. We are family.

I’m confident our finest hour is yet to come.